A perfect soundtrack to late August melancholy, when the air smells of tobacco and worn leather, and the leaves hint that they won’t be sticking around too much longer. Set against nearly any scene, the Icelandic composer Jóhann Jóhannsson’s works never cease to make the picturesque cinematic. (The picturesque portrays the world as-is; the cinematic envisages its imminence.)

Finally, a movie for linguists who specialize in translation (my friend @christletine, for example, who turned me on to the next item). Still, wouldn’t it stand to reason that aliens technologically advanced enough to travel here in massive craft that hover with silent drama above open fields as if they’re stand-up staplers might have deciphered our stupid human languages, rather than attempting to communicate frustratingly via a series of giant coffee cup ring stains? If only Larry David were in the cast. Different film altogether.

According to a Washington Post article, Athanasius Kircher, the 17th century Jesuit scholar of German origin retained this untranslatable document for a time. I’m familiar with Kircher by way of his innovations in musical mechanization. Around 1650, Kircher’s Musurgia universalis contained an “Acoustic Musical Theatre” featuring a hydraulic pipe organ. An inscribed rotating horizontal barrel—like a music box or player piano or MIDI might use—triggered the organ’s notes, in addition to animating a series of synchronized miniature tableaux—blacksmiths hammering away rhythmically at a forge, or skeletons dancing in elaborate loops. Kircher’s perpetual motion machine, which predates electronic automation by nearly three hundred years, encoded music into a rudimentary programming language.

But any language is best tested on the battlefield. Ideally, language during wartime should be fast, direct and understood without difficulty. It must at all cost withstand miscommunication and distortion. Those once magically minded enough to intimately understand the Voynich Manuscript’s secrets seem to have lost. The meek shall inherit the earth like David Letterman inherited Johnny Carson’s time slot.

While I believe and argue that making electronic music can involve every bit as much performance as playing acoustic instruments, I’m lately only enamored with music produced directly through the human body and its movement, by breath and by heartbeat, by an indexical relationship to lived, shared experience. Experimental fiddler and multi-instrumentalist Laura Cannell’s pieces capture all the immediacy of riding the rusty chain off a bicycle. Like Hugo Carlaw, Callum Keith Rennie’s character in David Cronenberg’s prophetic 1999 film “eXistenZ”, I’m choosing sides. 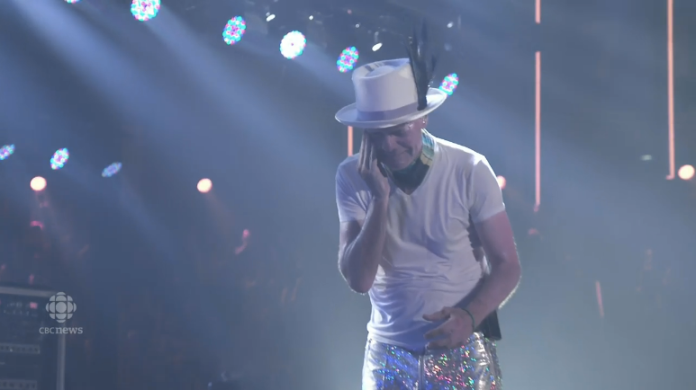 There’s a bunch of hats that it’s not. It’s not a Fedora. Fedoras are narrower, with more elaborate crown indentations. It’s not a Pork Pie hat. Pork Pie hats aren’t so tall. It’s not a Homburg hat. They’re stouter. It’s obviously not a Cowboy hat. It’s almost a Pimp hat. It’s nearly a Boater hat, too, but it’s not made of straw. The closest I could come to identifying our Dark Canuck Gord Downie’s hat—the soft white plush felt hat boasting a wide-smiling brim, adorned with silver ribbon hatband and feather plumage—one of many hats he wore at The Tragically Hip’s ultimate hometown gig—the hat he was in when finally, inescapably, he dissolved in tears during the coda of “Grace, Too”, throwing his microphone to the stage floor, the CBC’s stoic cameras cutting to a young woman in the audience, long blond hair crushed under Hip baseball cap, hands clasped and holding her breath alongside 11.7 million of us—was, aptly, a Planter’s hat and Boss-of-the-Plains hybrid.

Canadian filmmaker Sarah Polley told The New York Times, “It’s been such a gift that they’ve let us say thank you with this tour. I bought a grilled cheese sandwich yesterday and the guy serving me started talking about them and the two of us just stood there and wept together without apology or embarrassment.”Aside from combing for Jaws references in their lyrics and other nearly autistic tasks, classifying Gord Downie’s hat was one project that briefly kept my eyeballs from producing plump teardrops last Saturday night.